Is Coicou a Good Family Name?

Click on picture (above) to activate March 2011 CTV News Interview, covering Dr. Aristide’s return home and a quick plug about the $40 Billion Ransom that France has yet to return to Haiti.

January31 – February 1, 2003:  a meeting, called the “Ottawa Initiative on Haiti,” was held at the Canadian Government’s Meech Lake conference centre in Gatineau, Québec.

The extraordinary decisions taken at this gathering of non-Haitians were first leaked to the general public in Michel Vastel’s March 2003 article, published in French-language magazine l’Actualité. Under the prophetic title “Haiti put under U.N. Tutelage?,” Vastel described how, in the name of a new Responsibility to Protect (R2P) doctrine, parliamentarians of former colonial powers invited to Meech Lake by Minister Denis Paradis, decided that Haiti’s democratically-elected president, Jean-Bertrand Aristide, had to be overthrown, a Kosovo-like trusteeship of Haiti implemented while the US- subservient Haitian Army, the Forces armées d’Haiti (FAdH), would be reinstated alongside a new police force.

The real problem with Haiti is that the ‘International Community’ is so screwed up & divided that they are actually letting Haitians run Haiti!

Statement made by Assistant Secretary General of the OAS, Luigi Einaudi,  in front of Jean Saint-Vil as well as several other witnesses at Haiti’s Hotel Montana, on December 31, 2003.

Less than two months after Einaudi uttered these words, US Marines entered the residence of Haiti’s president, while Canadian RCMP soldiers secured the airport to facilitate the coup and occupation of Haiti. Since that fateful night, Haitians are no longer running Haiti and the bloodbath the foreign invaders claim to have intervened to avoid has reached unprecedented proportions, with full involvement of the UN forces engaged in what can only be defined as class and race warfare.

For more details see: What is Canada Doing in Haiti? 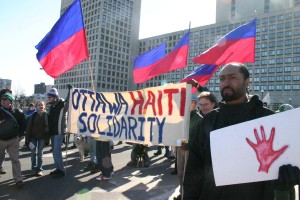